Skip to content
25% Discount on First Purchase with code: WELCOME25

Good posture requires the alignment of the Rib Cage with the head above and the pelvis below. 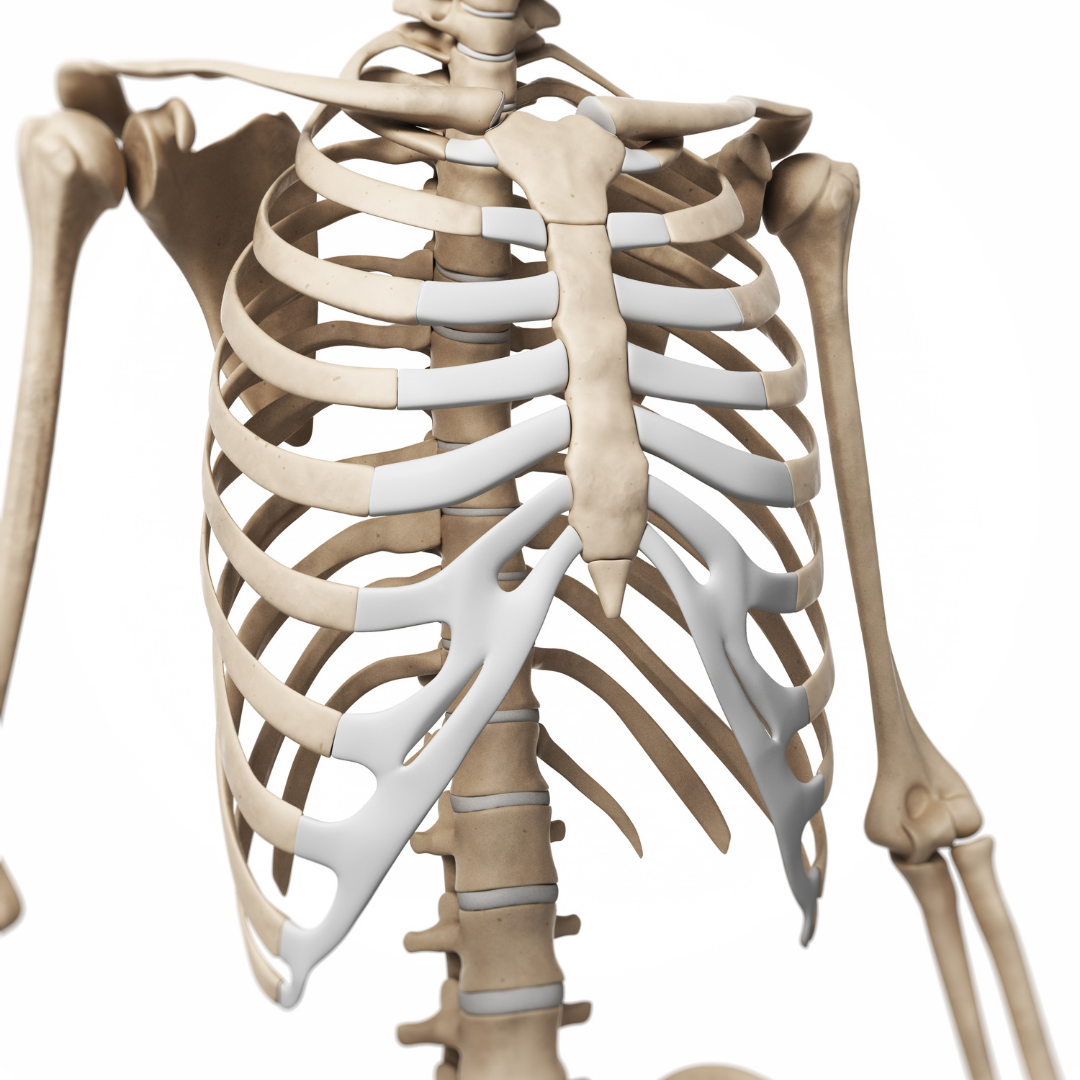 The Rib Cage (or Thorax) consists of the ribs, thoracic spine, and sternum (breastbone).

The rib cage (also known as the Thoracic Cage), or simply ribcage, is an arrangement of bones in the thorax of nearly all vertebrates. The rib cage is part of the axial skeleton and provides attachments for the muscles of the neck, thorax, upper abdomen, and back. 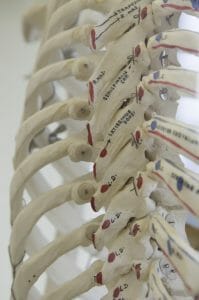 The ribs attach themselves to the thoracic spine on the back and the sternum at the front. In addition, the ribs at the front have cartilage attachments to the sternum, which allows for elasticity and flexibility.

In humans, it has a structure of 12 sets of ribs which articulate posteriorly with the thoracic vertebrae.

The first seven pairs of ribs, known as “true ribs”, connect directly to the sternum through their costal cartilage.

The following three sets of ribs, known as “false ribs”, are much longer than the true ribs but still connect indirectly to the sternum through their costal cartilage. 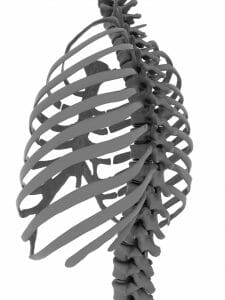 The bottom 2 sets of ribs are known as “floating ribs” because they have no anterior attachment point.

The space between our bones is filled with a jelly-like substance that acts as a cushion for the cartilage in our joints. In a healthy spine, the curve between each of your vertebrae is gentle and natural. It allows you to stand tall with grace and ease. When this curve decreases or disappears, it’s called a deformity, which may lead to changes to the disc and vertebrae.

What is the function of the costal cartilage?

The ribs and thoracic spine attach at the sternum in the front and the vertebrae in the back. The ribs and thoracic spine position affect your posture by determining how upright you are. The more upright you are, the less strain you put on your spine. The costal cartilage is a connective tissue that helps hold the ribs in place and absorb shock. It also provides flexibility to the rib cage.

What is the sternum?

The sternum is a long, flat bone located in the center of the chest. It connects to the ribs and helps to protect the heart and lungs. The sternum is also involved in keeping the spine aligned and helping to support the upper body.

Functional considerations of the ribs on posture

First, it protects the lungs and heart from injury. The ribs are curved, and they fit snugly around these organs, which helps to keep them safe.

Second, the rib cage helps to keep these organs in place. The ribs are attached to the sternum in the front and the vertebrae in the back, which prevents the organs from moving around too much.

The ribs can be likened to the handle of a bucket. As you move the bucket handle the size and dimensions of the area enclosed will either increase or decrease relative to the handles position.

Ribs that are tighter in front will appear low, narrowing the available space in the thorax, and may alter the placement of the shoulders, head, and neck above, and/or, the pelvis and abdomen below.

What can cause pain in the ribs?

There are many causes of rib pain, but some of the most common include:

How can your ribs affect your breathing?

If your ribs are diseased or in pain, the ribs will not fully expand to allow for optimal breathing.

The costal margin of your rib is moved inward when you inhale and drawn outwards when you exhale. This doesn’t happen because of a rib cage issue, leading to shortness of breath and difficulty breathing deeply.

You can get similar symptoms if one side of the lungs has been hardened or collapsed because that will limit its capacity too. The lung tissue on both sides moves together, so we take equally full breaths with each inhalation and exhalation cycle.

How can my Rib Cage affect my posture?

Your posture is how you hold your body while standing, sitting, or lying down. It may be habitual or intentional. Bad posture can lead to discomfort and distress of muscles, bones, and joints. For example, slouching compresses the internal organs, which may cause digestive problems.

Another issue that may arise from a tightened chest caused by poor posture is the added stress that tightness can place on the chest muscles. But, again, the associated pain can be confused with more underlying chest pain-related problems.

Poor posture contributes to back pain. It can also cause the shoulders to curve forward or downward in a rounded position, resulting in tightness of the chest muscles and neck. The body must be in line vertically when viewed from both the side and front for good posture. 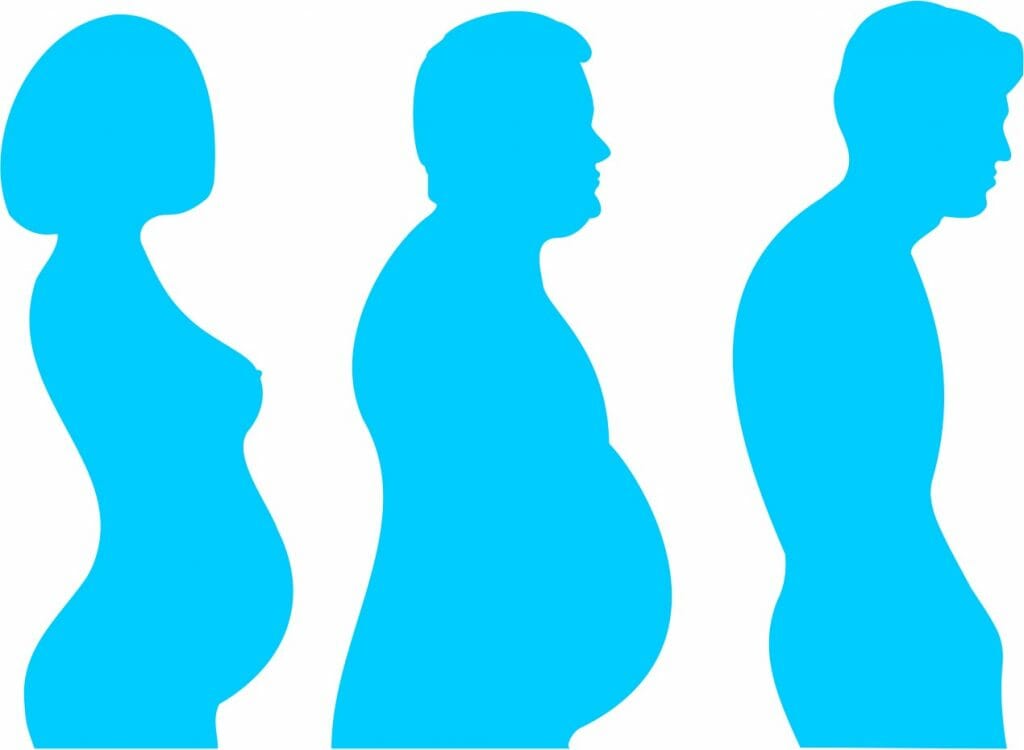 When a restriction is evident, your chest may be tightly held down in front, making it appear shallow, flat, and/or hollow. Or, alternatively, as a means of countering this restriction, you can puff out the chest – making yourself ‘appear’ to be standing up straight. Unfortunately, it is this latter point that gets most people into trouble.

Our attempt to improve posture by forcing a pattern from the outside, while appearing to be beneficial in the short term, requires effort to maintain, and therefore unsustainable. Also, and more importantly, pushing out your chest will shorten the back muscles and lengthen the front muscles beyond what is necessary for a balanced posture.

Remember that your rib cage supports the spine and protects the organs in it! So, having a good or healthy posture won’t just help you avoid injuries from your Rib Cage but also from other parts of your body as well.

Join us for the latest news and information.